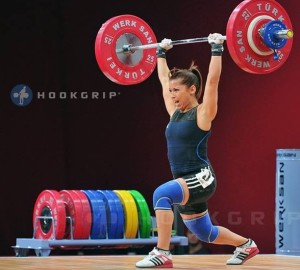 Without further ado… here is the interview with Anaïs Michel

Here she is snatching 70kg :

Thank you Anaïs for agreeing to this interview. In the weightlifting world, we often discuss nations like Russia and China but rarely nations like France. However, the french federation has recently celebrated its 100th birthday and France has produced to silver medals in male weightlifting (Dabbaya and Hennequin). Plus, you are moving up fast as well, now that you finished 9th at the 2013 Worlds. When did you get started in weightlifting and what made you want to try it?

I started my weightlifting career at 17 years old. My uncle introduced me to it. At first, I was not that interested in trying out this sport since I did not know much about it. It did not seem like an amusing sport and I was already involved in other sports that I liked. Then, I did my first competition and I was hooked from then on!

At that time, how were your training sessions structured (frequency, intensity and exercises selection)?

At that time, I was part of LHM (Langres haltérophilie Musculation) which was my first club. Benjamin Hennequin and David Matam were part of that club for a few years as well.

I trained 3 times per week and went up to 4 times when I qualified for the French Championships. On average, the intensity was around 80%. My training sessions were structured this way:

When you started, what was your biggest challenge/obstacle and best strength?

My biggest challenge was to win the French Championships and my best strength was stress management. Weightlifting was new to me so I did not take myself too seriously. I competed because it made me happy, and did so without having long term goals.

I am guessing that you are also a student. How hard is it to be a student while also being involved in sports?

I am not a student anymore. I now work in my club which is part of a multisport center (Complexe Omnisport). I am a developing agent and my work touches management (Weightlifting and bodybuilding), communication and secretariat of my club AAJB Haltérophilie. I have a contract funded by the state, my club, my federation and the DRDJSC.

Is there a specific structure/organization in place for athletes – such as a national center? Or, do most athletes train out clubs or universities?

There is a center in Paris called INSEP (Institut national de l’expertise et de la performance). Many athletes of the French weightlifting team train there year long, except for the school breaks (july and august). The athletes study and train there, and their schedule has been lightened.

In France, there is also a center for younger athletes situated in Aix en Provence. Much like the INSEP, this center is for junior (and younger) athletes who have a ‘’double project’’ (school and sport).

Some athletes prefer to train at their respective clubs and work. However, it is hard to find a job that is compatible with the schedule of high level sportsmen/sportswomen. There are some solutions to this problem: State funded contracts, or by the army, or by some community or by private companies.

As for me, I trained at the INSEP until 2011 and also studied Sport organization management there. After graduating, I could not wait to see something else than this training center as I needed a second start (been there for too long). This allowed me to make progress again. 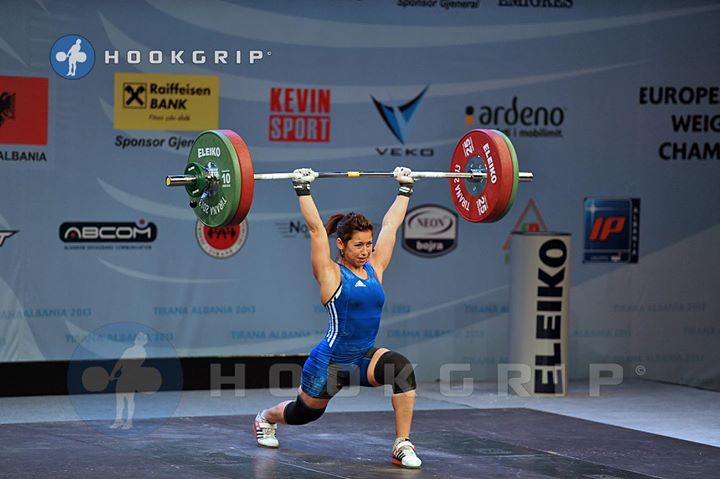 Is there such a thing as a French method of training? If not, what are the general principles that guide the planning of training?

I don’t think that there is a French training method but, in general we proceed this way : A first period (around 3 months) that seek to optimize physical qualities (squat, pulls, bodybuilding like pull ups and dips) is followed by a second period called pre-competition phase (2 months). This pre-competition phase seek to transfer the physical performance from the first phase into the the classical lifts (in the form of complexes and semi-technicals (powers, hang, etc.). A competition period then follows which last a month and a half. The point is to do work that is exclusively technical and heavy in order to prepare for our competition! Every cycle last 3 weeks of intense work followed by a recuperation week.

As of today, how are your training sessions structured?

During national training camps with the French team, we train twice a day followed by a day where we train only once, and so on and so forth. Over long periods of training, we get a rest day every 10 days. When I train at the club, I train once every day. The objective is to regulate the work I did during the camp and work on important technical points. In my case, I work on keeping my feet planted right of the start to bring the bar to the hip and work on the transition to the receiving phase.

According to you, what are the most important technical aspects of the classic lifts?

During the two movements (Snatch and clean), I believe that what matters the most is the start position. How you start the pull off the floor dictates the outcome of the lift. It is important to use your legs off the floor, have relaxed arms and have the shoulders over the bar. Doing so means that half of the job is already done!

Anaïs fighting for this 72kg snatch :

Mental preparation is under rated. The weightlifter often has to deal with anxiety or fear (of the weight, of the unknown, of the spectators, etc.). Is there a routine that helps you be confident for the competition?

The mental aspect is indeed important in our sport. To perform well, your head has to be in the right place!

Whenever we have worries, we have to lift more kilos on the bar! If mental preparation allows you to feel better, then you should not hesitate. This is being slowly developed in France but it is still taboo for athletes that see this as a weakness. However, you can compare it to muscle strengthening… Whenever we have a weakness, we do exercises to make us stronger. It is the same principle for the mental aspect of our sport!

Is it hard to maintain your body weight and does it necessitate a specific diet?

To go below 48kg, I usually start my approach to cutting weight 3 weeks before the competition. I pay attention to what I eat, and supplement with vitamins since I am eating less. The hardest is actually to get started!

What are your PRs?

What are your goals? I personally think that you could do 80-100!

My goal is to do 85-105 or more. No need to limit ourselves. ‘’À viser la lune, on se retrouve dans les étoiles!” (Edit from JP : French saying best translated by ‘’When shooting for the moon, you end up being in the stars’’, meaning dream big and you will accomplish big things).

What competition are you training for?

Does the French federation take care of its elite athletes or do the athletes rely mostly on sponsorships?

It is hard to become elite (defined as top 4 at the Europeans or top 8 at the worlds), but once you reach that level, the federation support us, by putting into place many things that will help us reach the next level.

Is weightlifting popular in France?

Unfortunately, it is not popular. We can watch weightlifting on Eurosport two times per year (for the Europeans and worlds). Depending on the region, there is some local media exposure…but nothing major.

According to you, what is your nation lacking to produce more champions and elite athletes?

Working at the club is difficult and most instructors are volunteers who cannot commit to it in the long term. Rising to the top is delicate and youth competitions seem unattractive. We have to know how to promote our sport as fun and make it attractive. We only have 2 nationals center (1 senior, 1 junior) and a regional center in Dijon!

I think that the public opinion is evolving positively. A few years ago, the federation decided to women weightlifting under the spot light with a documentary, articles in the newspaper and by using the results of French female weightlifters who, on top of being great performers, are totally feminine.

Thank you very much for this interview! Any final words?

What is hard in weightlifting (and in most high level activities) are the periods of time filled doubts, injuries, making a comeback after a failure. These periods of time are, however, very educative: ‘’ Success is to go from failure to failure without losing our enthusiasm’’.

Don’t miss out on Updates : Make sure you follow First Pull on Facebook andInstagram for daily pictures and advice.